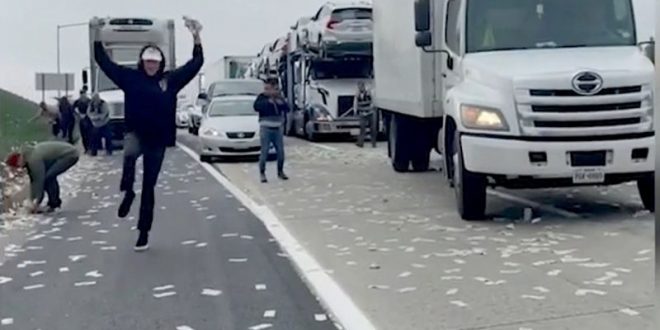 United States: rain of dollars on a highway after opening a van

Dollar bills fell from the sky “thanks” to an armored van that was on a California highway and whose door opened on Friday, November 19.

Faced with this treasure, motorists did not resist the temptation and rushed to the scattered bundles to pick them up.

Unfortunately for the drivers, this scene only lasted a moment as the police quickly intervenes to restore order. Police also arrested two people who were a little too greedy.

Indeed, although the banknotes have flown out of the truck, they nevertheless remain the property of the bank. This is why California Highway Police Sgt. Curtis Martin insisted that anyone still in possession of the recovered money turn it over to a police station.

Banknotes should be returned

During the press conference, Curtis Martin said “there are many videos showing people stealing money on the highway by picking it up from the ground.”

He warned that the police intended to use the videos to find the trace of those who did not intend to return the wrongly collected money.

“It’s better if they play the honesty card rather than wait to be found and knocked on their door,” he warns.