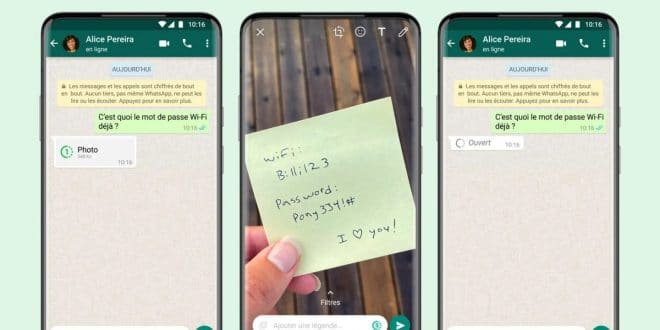 Ibrahim AMED 4 August 2021 In the news, Tech Leave a comment

The WhatsApp social network has updated its functionalities. The application has just released the “single view files” feature. It will now be possible to send “one-time” photos or videos, which automatically disappear after reading by the recipient.

You will first need to download the latest update for the application. Then, after selecting a photo or video to send, select option “1” in the text box. It will be necessary to redo this manipulation each time: it is inactive by default.

WhatsApp having already set up “temporary” conversations, which are deleted after seven days, this new function is an alternative that the social network offers for “more control over his privacy”.

But the latter still gives some warnings about this function, which does not fully protect the sender. On its blog, the messaging service recalls that it is always possible for the recipient of the ephemeral message to take a screenshot of it, without any notification being sent to the sender, unlike the social network Snapchat. But also, that a picture of the screen can be taken using another device.

Even if the automatic file saving function is activated, the sent photo or video will not be saved in the recipient’s camera roll. WhatsApp also explains that in the event that the recipient does not view the photo or video, the file will be deleted after 14 days.

Finally, WhatsApp specifies that “encrypted media can be stored for a few weeks on WhatsApp’s servers after you send them”.