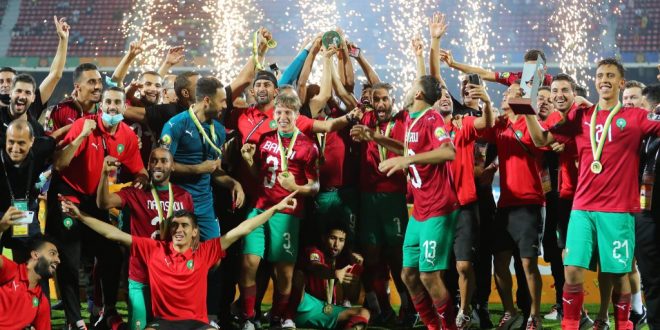 Morocco emerged as winners of the 6th edition of the Total African Cup of Nations Championship following a 2-0 win against Mali to retain the title they won in 2018.

The Atlas Lions having won the 2020 CHAN title became the first nation to win the title back to back.

As expected from a final of this magnitude , both teams headed to the game with the awareness of writing history.

A keenly contested tie saw Morocco bossing the game but Mali had the biggest threat as both teams failed to score in the first half.

The second half was looking much like what we saw in the first half Soufianne before Bouftini broke the deadlock in the 69th minute from a header.

The goal set the tune for an interesting finals as Mali began to push forward a get the equalizer.

However, they game was put beyond reach for the Malian side when Morocco captain Ayoub El Kaabi scored a header from a corner kick in the 80th minute.

Mali went on to complete the game with 10-men after Isaka Samake was shown a second yellow card for his tackle on an opponent in the 90th minute.