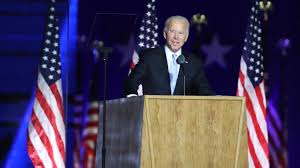 Joe Biden the new American President promised to rebuild his country’s partnership with the African Union (AU) moments after he delivered his first foreign policy speech since taking office.

His predecessor, Donald Trump, sparked a row in 2018 over his alleged use of the word “shithole” to describe African nations.

Mr Trump later denied that he is racist.

On Friday the White House tweeted a video of President Biden’s remarks to the continental body ahead of its 34th summit. He said:

“My administration is committing to rebuilding our partnership around the world and reengaging with international institutions like the African Union.”

“We also must confront the serious challenges we face. That includes investing more in global health, defeating Covid-19 and working to prevent, detect and respond to future health crises, and partnering with the African CDC and other institutions to advance health security.”

President Biden also promised to engage the AU in addressing conflicts on the continent.