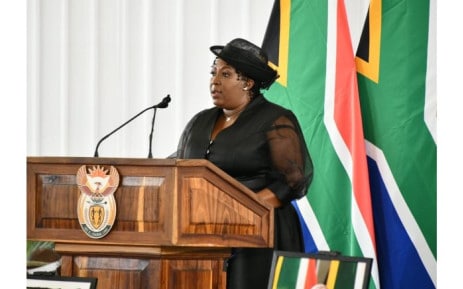 Seen without a mask, a senior South-african official under investigation

Bheki Cele, the South African Police Minister, has ordered investigation into the alleged conduct of the head of Mpumalanga province who was seen not wearing a mask while attending a funeral on Sunday.

Refilwe Mtsweni-Tsipane said she was not aware that her mask fell off when she stepped out of her car, according to public broadcaster SABC.

But the police minister said he is “concerned” about the incident as wearing of face masks in public is “a non-negotiable”.

“I have spoken to the National Commissioner of the South African Police Service, General Khehla Sitole to look into the matter of the Premier and an investigation must be conducted and necessary action must be taken.” Mr Cele said in a statement

Ms Mtsweni-Tsipane was seen walking some distance and hugging officials without wearing a face mask at the funeral of Minister in the Presidency, Jackson Mthembu.

Wearing of a face mask in public was made mandatory when the country recorded more than 2million cases of the covid-19 pandemic.

Read more: Burundi: new leader at the head of the ruling party

South Africa is the country the most affected by the pandemic in Africa.

There has been a surge in cases since a new variant was identified in the country in November.