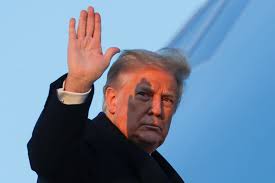 To everyone’s surprise Donald trump dethroned Barack Obama as the most admired man in the United States. The Head of State has thus dethroned his predecessor who occupied this place since the last twelve years.

The Republican has this time won 18% of the vote, against 15% for the ex-democrat president.

On the other hand, Joe Biden has been chosen by 6% of the citizens. The famous doctor Anthony Fauci collected 2% of the vote.

On the women’s side, the first position returns as in 2019 to Michelle Obama who has received 2% of the vote.

Read more: At the end of his mandate Donald Trump pardons his relatives

The second woman the most admired in the United States is the next vice-president Kamala Harris with 6% and Melania Trump arrives in the third position with 4%. She was in the second position the previous year.

According to informations, this survey has been realized between December, 1 and 17 on 1018 adults 21% of whom gave no answer and 11% have named a friend, family member as persons they admire the most.