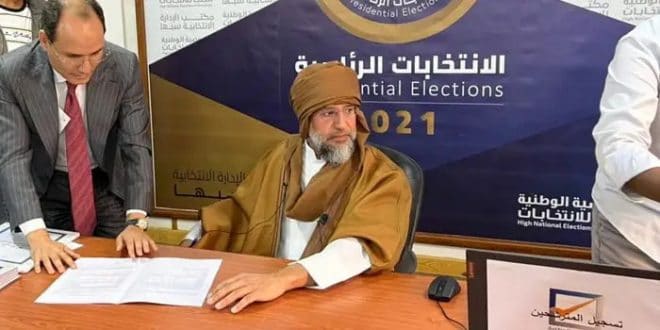 The son of late Libyan president Muammar Gaddafi, Saif al-Islam al-Gaddafi, appeared for nearly the first time in a decade on Sunday to register as a presidential candidate for a December vote planned to help end the years of chaos since his father was toppled.

Saif al-Islam al-Gaddafi, 49, appeared in an electoral commission video in traditional brown robe and turban, and with a grey beard and glasses, signing documents at the election centre in the southern town of Sebha.

His formal entry into an election whose rules are still contested by Libya’s squabbling factions may also cast new questions over a contest that features candidates viewed in some regions as unacceptable.

Despite the public backing of most Libyan factions and foreign powers for elections on Dec. 24, the vote remains in doubt as rival entities bicker over the rules and schedule.

However, after his announcement, Gaddafi supporters demonstrated in his hometown of Sirte, and in Bani Walid, a former Gaddafi stronghold.

Educated at the London School of Economics and a fluent English speaker, Saif al-Islam was once seen by many governments as the acceptable, Western-friendly face of Libya, and a possible heir apparent.