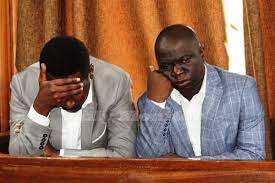 Uganda: release on bail of MPs Ssewanyana and Ssegirinya rejected

Justice Lawrence Tweyanze of the Masaka High Court in Uganda has rejected a request for release on bail filed by MPs Muhammad Ssegirinya and Allan Ssewanyana, who face several charges, including murder, attempted murder and aiding and abetting terrorism.

This was after the state prosecutor, Mr Richard Birivumbuka submitted the same against the two MPs who have been on remand for several days.

Justice Tweyanze also said that the applicants’ lawyers failed to prove their claim that the legislators were seriously ill, as they did not present medical certificates to prove their case.

According to the judge, the first charges where the applicants had been granted bail were different from the case before him.

“The fact that they were released on bail before can’t be a condition now given that they are facing a multiplicity of capital offenses and the risks of absconding is high, based on the fact that they had no other charges against them before but now they do,” he added.