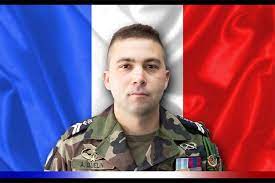 Mali: death of a French soldier during a ‘maintenance accident’

A French soldier died in an accident during a maintenance operation on the desert platform in Timbuktu in Mali. It is about Adrien Quélin, Marshal of the Logis.

His death is announced by General Thierry Burkhard, the Chief of Staff of the Armed Forces and Florence Parly, the French Defence minister who paid him a last tribute.

“The Marshal of the Logis Adrien Quélin, a mechanic in the Roc Noir Desert Battle Group of the Barkhane Force, was carrying out a maintenance operation on a truck. He was seriously injured by the tilting of the cab of this truck while he was working on the engine of the vehicle “, said the statement from the army.

“The Chief of Staff of the Armed Forces, Army General Thierry Burkhard, bows with deep sadness to the memory of this soldier who died in operation. His thoughts are with his family, his relatives and his brothers in arms “, concludes the press release.

French forces have been hunting jihadist cells in the Sahel region for years.