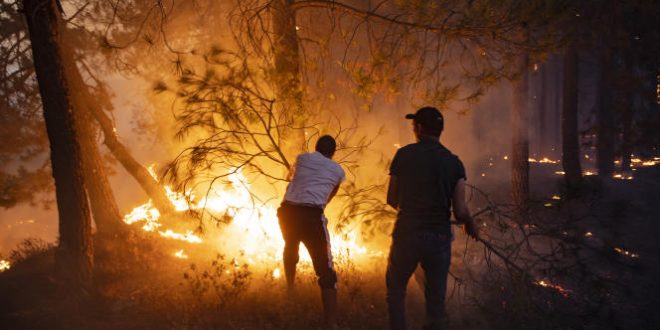 The forests of northern Morocco are burning for the second day in a row. 200 hectares have already gone up in smoke. Fortunately, no victim is to be deplored for the time being according to the authorities.

The changing winds “do not help to control the fire,” said the regional director of the Department of Water and Forests in Chefchaouen, Rachid El-Anzi.

According to him, 200 hectares of forests had already been destroyed by late Sunday evening.

“No casualties are to be deplored, priority having been given to preventing the spread of fire to inhabited areas,” he added.

The firefighting teams notably benefited from the support of four water bombers. The causes of these fires are not yet known, specified Rachid El-Anzi, estimating that the strong heat and the winds could constitute triggers.

The Mediterranean basin has been affected in the past two weeks by fires, especially in Greece, Turkey and Algeria. In the latter country, more than 90 people have died or gone missing since last Monday in the fires. The warming of the climate increases the probability of heat waves and droughts and by extension, fires according to specialists.