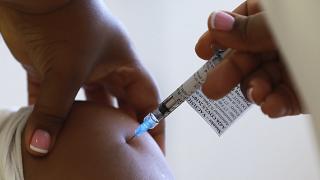 600,000 doses of Oxford/Astrazeneca vaccines are being given to frontline health workers, security personnel, people aged over 60 and those with pre-existing conditions.

To ensure that Ghanaians are convinced to get jabbed, President Nana Akufo-Addo, his wife and other top officials received their jabs on Monday. Despite the gesture, some are still skeptical.

“For me, I would not take the COVID-19 vaccine because I’ve not had enough education about it. That’s why I’m not ready to take (it),” another resident called Olivia said.