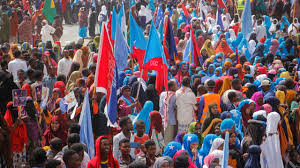 Somalia’s opposition presidential candidates have called for protests on Friday over what they call “illegal stay in power by the president”.

Former President Sheikh Shariff Sheikh Ahmed said, while making the announcement on behalf of other candidates, that the government had failed to organise both parliamentary and presidential elections.

There was no way forward for presidential elections to be held without a new parliament in place.

“The government wasted time in pushing for a one person one vote, which was not possible at all. Unfortunately, it did not implement as agreed on the indirect elections [a model where selected delegates elect members of parliament who choose the next president] as agreed on in September 2020,” Mr Ahmed said on Sunday.

The presidential candidates’ coalition has asked all Mogadishu residents to come out in large numbers and protest about the elections.

However, there is a fear of violence and analysts say it’s hard to predict the consequences of such a call in a city where it is already hard to maintain law and order.

Somalia’s leaders are yet to agree on the election framework as the international community continues to pressure them.