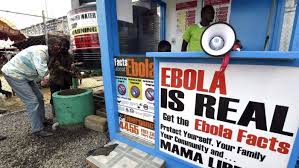 Liberia’s President George Weah has ordered health authorities to heighten surveillance in the wake of an Ebola resurgence in neighbouring Guinea.

Three people have died in Guinea and four others reportedly have symptoms. The Guinean region affected by the latest outbreak is near the border with Liberia.

President Weah is currently on a tour of the border region and has asked authorities to be on high alert.

He has instructed ordered health officials to “immediately engage communities in towns and villages bordering Guinea and increase anti-Ebola measures”.

The West African Ebola epidemic of 2014-16 affected 28,616 people, mainly in Guinea, Liberia and Sierra Leone. About 11,310 people died in what was the largest outbreak of the virus ever recorded and 4,000 of those deaths were in Liberia alone.

As of Monday, Liberia has not reported any new cases.

Mr Weah, who was a senatorial aspirant during the 2014 outbreak, released a song with a Ghanaian singer Sidney to create awareness.