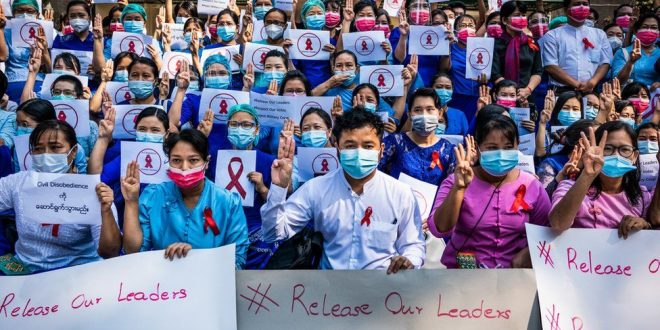 A civil disobedience movement in Myanmar is gaining momentum with teachers and students protesting against Monday’s military coup.

Although Ms Suu Kyi has not been seen in public since Monday she is believed to be under house arrest, according to an NLD official.

Myanmar, which is also known as Burma, has remained mostly calm in the aftermath of the coup, which has plunged the South East Asian country into uncertainty.

What is happening and why?

Ms Suu Kyi and other leaders have been held since the military’s coup.

Earlier, the military detained another senior leader from her National League for Democracy (NLD) party.

The armed forces had backed the opposition, who were demanding a rerun of the vote, claiming widespread fraud.

What has the international reaction been?

The UK, EU and Australia are among those to have condemned the military takeover.

UN Secretary-General António Guterres said it was a “serious blow to democratic reforms”.

US President Joe Biden has threatened to reinstate sanctions.

But not everyone has reacted in this way.

China blocked a UN Security Council statement condemning the coup. The country, which has previously opposed international intervention in Myanmar, urged all sides to “resolve differences”. Its Xinhua news agency described the changes as a “cabinet reshuffle”.

Neighbours including Cambodia, Thailand and the Philippines, have said it is an “internal matter”.