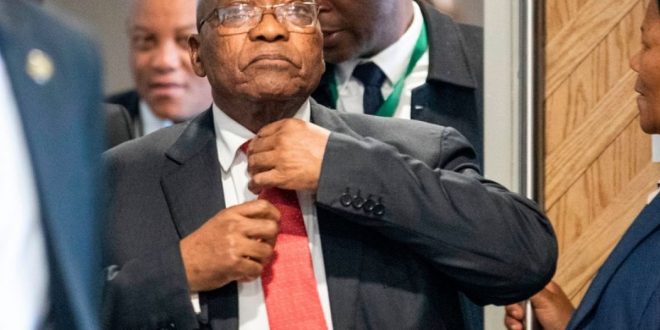 South African ex-president Jacob Zuma will once again not appear on a commission probing suspicions of widespread corruption, one of his lawyers, Eric Mabuza has said. The move has sparked legal repercussions within the country’s legal fraternity.

Cathleen Powell is an Associate Professor in public law at the University of Cape Town. She said if Zuma doesn’t respond to the summons of the Zondo commission, ‘’he’s committed a crime’. “I don’t know what the Constitutional Court is going to do, but while it says nothing, Zuma is still, under law, required to respond to the subpoena of the Zondo Commission, and if he doesn’t, he’s committed a crime for which he can be convicted and imprisoned”, Powell said.

The former South African president testified only once before the commission in July 2019. But Zuma withdrew after a few days. He argued that he was being treated as an accused and a not a witness.

“Now, ex-president Zuma’s claims that he is not subject to the power of the commission and doesn’t have to answer questions are lies. From what we’ve heard so far, his claim that he wasn’t involved in corruption is a lie, and if he’s able to sell that for long enough, then he is able to drive the kind of lawlessness that we saw in the United States, and I think it is time for the Zondo Commission and the country to draw a line”, she added.

On Friday January 15, the commission suspended hearing. Judge Raymond Zondo was to isolate himself as one of his close associates tested positive for the coronavirus. It is uncertain if hearings scheduled for next Monday would be maintained.

Mired in scandals, former president Zuma who ruled the Southern African nation between 2009 and 2018, was forced to resign. He was replaced by Cyril Ramaphosa, who promised to eliminate corruption.

The Commission of Inquiry, which was initially scheduled to sit until March, has to request an extension because some hearings could not take place due to the pandemic.

Already, the commission has heard from dozens of ministers or former ministers, elected officials, businessmen or high-ranking civil servants who have exposed the alleged corrupt practices under Zuma’s era.