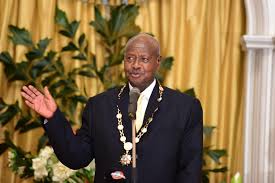 Uganda’s President Yoweri Museveni has been re-elected for a sixth term with 58.64% of the vote, the electoral commission said on Saturday, as rival opponent Bobi Wine alleged widespread fraud a day earlier and said citizens should reject the result.

Bobi Wine, whose real name is Robert Kyagulanyi, won 34.83% of the vote, according to the electoral commission.

Museveni,76 years old, has been in power for 35 years and campaigned for another term arguing that his long experience makes him a good leader.

The pop-star Bobi Wine turned politician Wine,38 years, appealed to young Ugandans and pledged to end what he calls dictatorship and widespread corruption.

Wine on Friday claimed victory in the presidential elections, rejecting as a “complete sham” early results that gave Museveni a wide lead.

Museveni is one of the world’s longest-serving leaders and has been leading the country since 1986.

Read more: The most richest man is encouraged to create an anti-censorship social network

The US, EU, UN and global rights and democracy groups have raised concerns about the integrity and transparency of the election.

The United States, a major aid donor to Uganda, cancelled a diplomatic observer mission after too many of its staff were denied permission to monitor the election.

Besides an African Union mission and East African Community there was no major international group watching over the vote.