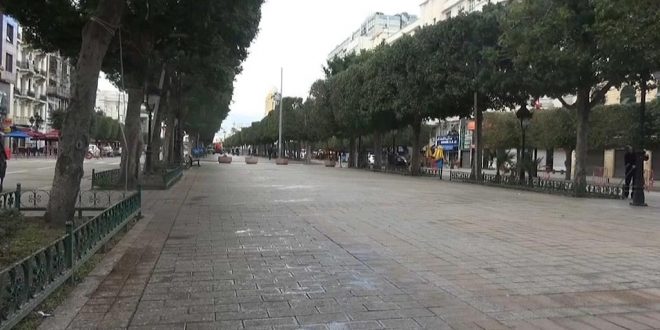 Commemoration of the 10 years of Tunisian revolution

Tunisia on Thursday commemorated the 10th anniversary since the flight into exile of iron-fisted President Zine El Abidine Ben Ali, pushed from power in a popular revolt that foreshadowed strife and civil war in the region, known as the Arab Spring.

But there were no festive celebrations marking the revolution in this North African nation, which was ordered into lockdown for four days starting Thursday to contain the coronavirus and demonstrations are banned.

The tree-lined Avenue Bourguiba, the main artery in the capital city of Tunis, which became a center of the uprising, was deserted except for a lone citizen standing in front of the once-dreaded Interior Ministry.

Police set up checkpoints around the city center, checked pedestrians’ identification documents, and turned some around.

Demonstrations and gatherings were banned for four days starting from Thursday.

The revolution was sparked by the desperate act of a 26-year-old fruit seller, Mohammed Bouazizi, who set himself ablaze on December 17, 2010, to protest police humiliation in a town in the neglected interior of the nation, Sidi Bouzid. His death unleashed simmering discontent and mass demonstrations against poverty, joblessness and repression.

That in turn ricocheted beyond Tunisia, triggering what is known as the Arab Spring uprisings with crackdowns and civil wars in the region.

Ben Ali ruled for 23 years over a system that instilled fear in many Tunisians, and fled to Saudi Arabia on January 14, 2011, amid a snowballing rebellion.