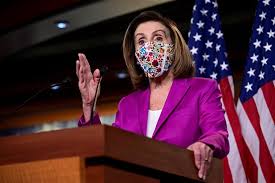 Nancy Pelosi condemns the attacks of the capitol Hill, and asks the dismissal of Donald Trump

In the aftermath of the violence of the Capitol Hill in Washington, amazement gave way to anger. While Joe biden qualifies the rioters of “terrorists”, the democrate Nancy Pelosi claims the dismissal of Donald Trump, accusing him with his supporters of having participated to a Rebellion.

“I join myself to the Democratic Senate leaders, to ask the vice-President to dismiss his President by immediately evoking the 25th amendment. If the vice-President and the cabinet do not act, the Congress may be ready to proceed to the impeachment of Donald Trump”, has declared the President of the House of the Representatives.

Read more: Reaction of the World Evangelical Alliance after the events of the Capitol

Last wednesday, to remind it, supporters of Donald Trump, encouraged by an earlier statement of their idol, wreaked havoc on the Capitol that they stormed. They interrupt an extraordinary session of the Congress which was about to validate the victory of Joe Biden.