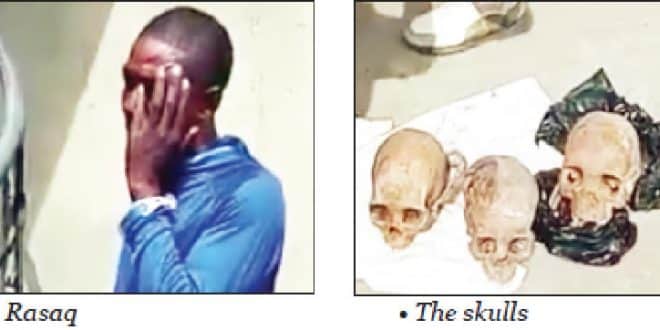 Nigeria: man arrested with skulls found on him

A man was arrested with three suspected human skulls in the Ayobo area of Lagos State, as he was taking them to a destination,Nigeria, according to reports.

The suspect was seen carrying a black nylon bag and the police demanded what was in the bag but he gave no meaningful explanation.

“In a bid to ascertain what was in the bag, we have opened it and found three skulls,” according to the police.

Upon realizing that he had been caught, he broke down in tears as he lamented that his life had been ruined.

“My daddy has died; you have already spoiled me, I saw the skulls inside the gutter at Ayobo side. Ha, my life has spoiled,” he said.

The case has been transferred to the State CID. He was arrested during a stop-and-search operation.