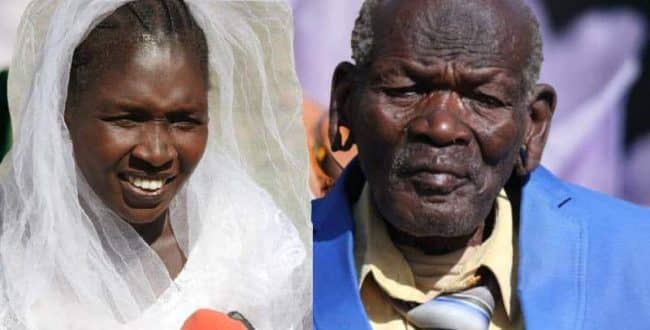 Kenya: a 99-year-old man gets married for the first time

A 99-year-old Kenyan man has married his girlfriend aged 40 after 20 years of dating as the lovebirds tied the knot in a colorful wedding ceremony.

“it was his first marriage in the 99 years he has lived as for the lady she has three children from a previous relationship,” according to report.

“I have always wanted peace of mind and was also busy with menial jobs. When I decided to marry all my friends were already grandfathers. But when I met my wife, I discovered that I found what I wanted in life, I am happy because I am a married man. I am confident that the happiness in my marriage will make me live longer,” he stated.

“She was young when we first met, and I loved her because of her humility. I was first introduced to her by a female friend and we connected well despite the age differences. I am happy because my wife is now mature and responsible,” he added.

“I loved him because he was humble and listened to me. He was old, and I decided to be his helper because I knew that I would become a married woman like other women,” the lady said.