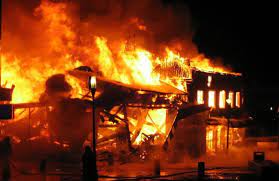 A man burnt to death at Tano Dumas

An eighty-year-old man has been burnt to death at Tano-Dumase in the Sekyere South District of the Ashanti Region, Ghana, according to reports.

The man was said to be in the his room when it gutted fire on Thursday, January 5, 2022, consuming the man to death.

Ofori Kwaku, Assembly Member for Tano – Dumase Electoral Area, explained that personnel of the Ghana National Fire Service (GNFS) in the Ashanti Region were called to the scene and after dousing the fire, the charred body of the man was found.

The body has since been conveyed by the police and deposited at Tano-Dumase Hospital morgue for autopsy and preservation.