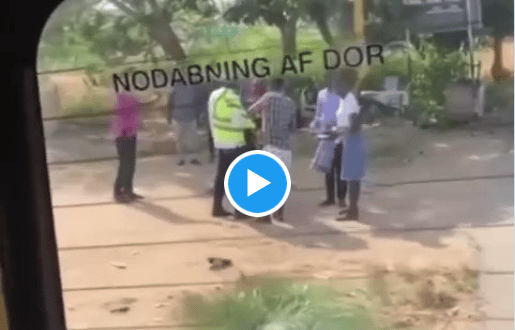 A police officer attacked by a driver and his companion

A ghanaian police officer was filmed being assaulted by a “trotro” driver and his companion as he approached the driver as part of an official traffic stop, in a video currently circulating.

“The officer accosted the driver for a traffic violation and ordered them to follow him to the station,” according to reports.

However, the driver allegedly refused and assaulted the police officer.

In the viral video, the driver, with the assistance of his mate, manhandled the officer before plunging him to the ground.

While one of them pinned him down, the other could be seen smacking and dragging the helpless uniformed man as they appear to retrieve what is believed to be their car key from the policeman.

It took the intervention of some passers-by to free the police officer from the clutches of his attackers.

It is unclear when the incident took place, but netizens have described the behaviour as unacceptable.