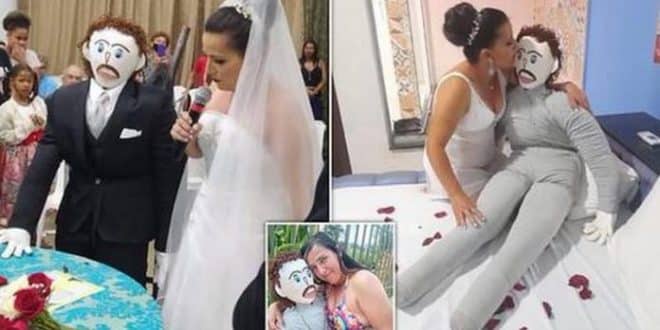 Woman who married a rag doll claims he cheated on her

Elise ATAYI 3 weeks ago In the news, Society, United States Leave a comment

A 37-year-old man Brazilian woman who married a rag doll ” the love of her life”, revealed that he cheated on her as they prepared to celebrate their first wedding anniversary.

She admitted that their relationship was hanging by a thread after claiming that the had “cheated” on her.

In the latest twist in the very bizarre tale, she claimed he went to “a motel with another woman” and even says she “found texts on his phone”.

“I asked him who the woman was and he didn’t respond,” she stated.

Now, the mother of three and her rag-tag lover are in separate bedrooms as she didn’t want to stay in the same room due to the betrayal.