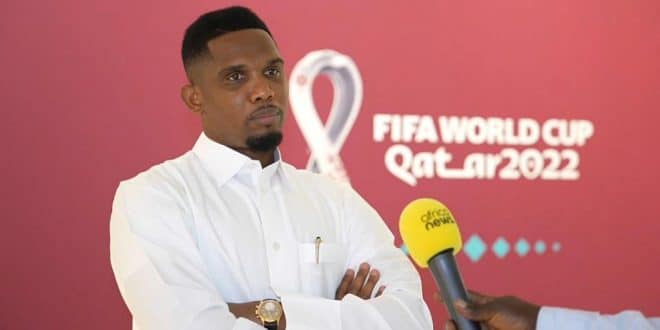 Samuel Eto’o has ambitions to see Cameroon win the next World Cup and it’s not the Lions’ last friendly loss to Uzbekistan that will affect his ambitions.

Two months before the World Cup Qatar 2022, Cameroon, one of the African representatives at this great mass of soccer is sharpening its weapons like all other selections. During the international break in Seoul, South Korea, the Indomitable Lions lost a friendly match against Uzbekistan (2-0). Despite this surprise defeat, the ambitions of the President of the Cameroon Football Federation (Fecafoot) for this World Cup remain intact.

” Victories are prepared in defeats! To win you must know how to lose! … When I say that I want to win the World Cup, people say you are crazy! I want to dream and I want you to dream with me! If I had not dreamed, I would never have become Samuel Eto’o … ,” said Samuel Eto’o to Cameroonians living in South Korea on Sunday.

The five-time African champions will play their second friendly match of this international break against South Korea on Tuesday.

This game will also serve as the last before the start of the World Cup on November 20. Cameroon shares Group G with Brazil, Serbia and Switzerland.