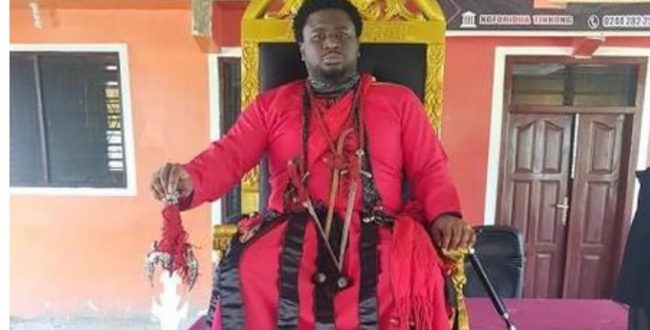 The General Overseer of the Universal Spiritual Outreach Society, Prophet Kwabena Boakye Asiamah, popularly known as Ajagurajah, has warned against picking up money from the floor, especially if it is not yours, saying it makes you automatically indebted to some spirits, local media reported.

“Picking money from the floor causes your salary to finish fast,” Ajagurajah warns

According to Ghanaweb, the popular prophet made this assertion while speaking to DJ Marcus on Kumasi-based Abusua FM.

Imagine bumping into a bundle of cash while walking and there is nobody in sight, at a time when you are in some critical financial difficulties.

But Ajagurajah says: “The owner cried when he realized he had lost the money. He didn’t drop it intentionally. You have been praying and asking for money and you saw it and took it.”

He warned: “You have to go look for whoever prayed for you or whichever power allowed that to happen, and thank them or else you will keep paying for that debt till you die.”

Well, before you rubbish the prophet’s warning, saying that it is just one of his attention-seeking comments, he asks: “Have you realized there are people who complain that their salary even finishes before they receive an alert?” claiming: “It’s because they must have picked money through this means. The spirits will deduct even before it hits your account.”

So, if picking up money that is not yours from the floor has spiritual consequences, what should you do? Pass by when you come across one? Ajagurajah says no wise person must pass by money found on the floor, but his advice is that when you pick it, look for the owner and hand it over to avoid bearing any spiritual repercussions.