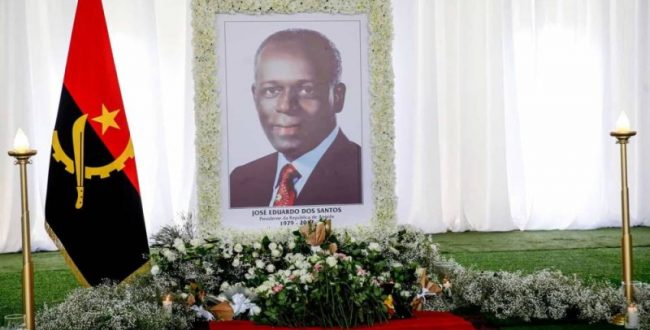 Elise ATAYI 4 weeks ago Africa, central Africa, In the news Leave a comment

A last tribute was paid on Sunday at Agostinho Neto memorial in Luanda by the Angolans to their former President José Eduardo dos Santos who died 8 July in Barcelona.

Several African heads of state took part to the funeral, but six of the late’s children were absent.

This funeral comes after more than a month of battle within the Dos Santos family.

A dispute between two of the former president’s daughters and his widow, Ana Paula, had prevented the repatriation of the remains for over a month.

Only the children that José Eduardo dos Santos had with Ana Paula were present at the funeral.

“We are tired of the internal wars,” said Jociana dos Santos, one of the daughters, speaking on behalf of the family, to RFI.

“For my father, nothing was more important than family, he was always very optimistic, looking to the future, a future in which we would be united. On behalf of my family, I thank the government for making this day possible to celebrate a great man,” she said.

The other six children, from previous unions, did not attend the ceremony.

“It’s sad, but our family is the MPLA, the party! And when the leader of the party dies, the second President of the Republic, we must forget the discords. We have to be here,” confided a cousin of Ana Paula to RFI.

Tchize Dos Santos, another daughter of the former President, described the ceremony as “a horrible comedy“ on social networks.

It should finally be noted that the state funeral of the former Angolan president took place while the country is still waiting for the final results of Wednesday’s general elections, whose provisional results are disputed by the opposition.