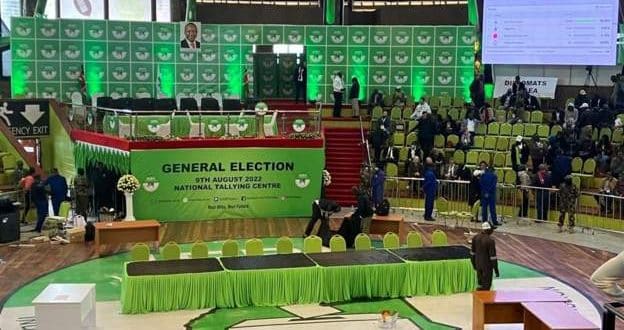 The national results tallying centre in the Kenyan capital, Nairobi, is teeming with activity as the electoral commission finalises processes ahead of declaring the presidential results.

There is little activity at the floor of the centre where presidential candidate’s agents, lawyers and election officials were earlier busy verifying results sheets submitted from around the country.

Workers have been busy clearing desks and chairs used by agents.

The auditorium, which has been a hive of activity for the last couple of days, with occasional flare ups disrupting the verification process, is unusually calm.

Politicians from the two coalitions who had set up camp in the hall to supervise the process seem exhausted and can be seen chatting.

Security has been enhanced at the main gate to the venue with rigorous screening at the entrance to the auditorium.

So far Deputy President William Ruto has a slight lead over ex-Prime Minister Raila Odinga – 51% against 48%, according to local media.

The final results must be announced by 16 August, according to Kenyan laws.