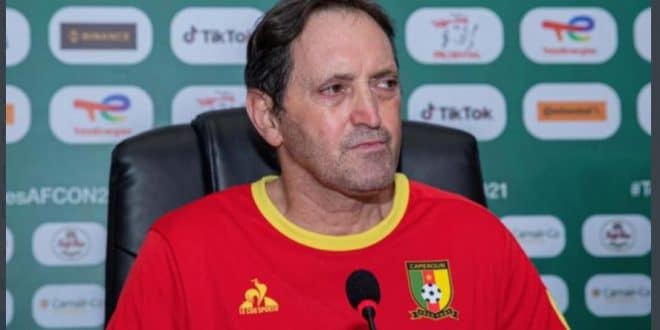 Sacked after the Afcon 2021, the former coach of Cameroon, Antonio Conceiçao, seized FIFA which decided in favor of the Portuguese technician.

FIFA motivates its decision by non -compliance with the commitments of the Cameroonian Football Federation (Fecafoot). Fecafoot will therefore have to pay the former Indomitable Lions coach the sum of 1,603,500 euros or 1,051,896,000 FCFA.

Fecafoot had dismissed Antonio Conceiçao on the grounds that the latter had not respected his contract, particularly in his close which stipulated that the team had to reach the final.

The advice of coach Antonio Conceiçao reacted by arguing that their client’s dismissal did not relate to the old contract which had already been settled.

The Minister of Sports signed a new contract with the Portuguese, before it was interrupted by the dismissal of Antonio Conceiçao by Samuel Eto’o fils, the current president of Fecafoot.

In addition, the lawyers for coach Antonio Conceicao evoke arrears of wages not paid in the old contract.

The Cameroonian sports audience, meanwhile, suspects a mafia orchestrated around the contracts of the coaches of the Indomitable Lions. In Yaoundé, Douala, as in the other cities of the country, people think the dismissal of these coaches few months before the end of their contract is a strategy to get out of the staggering sums of the state funds in order to pay compensation that hide retrocommissions.