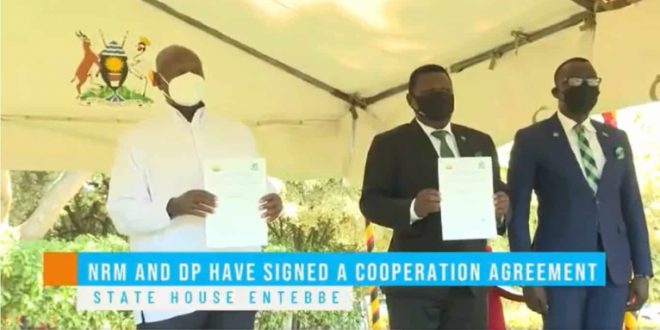 The leader of the opposition Democratic Party in Uganda, Norbert Mao, has signed a cooperation agreement with the ruling National Resistance Movement party of President Yoweri Museveni.

It was signed on Wednesday following a meeting between the two leaders at State House, Entebbe.

President Museveni praised leaders of Democratic Party for the “gesture of mature, foresighted, and constructive politics”.

Although supporters of Mr Mao see this development as smart bipartisanship, critics feel vindicated after accusing him of cosying up to Mr Museveni.

Other critics could also see this as another attempt by the president to weaken the opposition further. Previously the president has successfully wooed opposition politicians by offering them positions in government, the BBC reported.