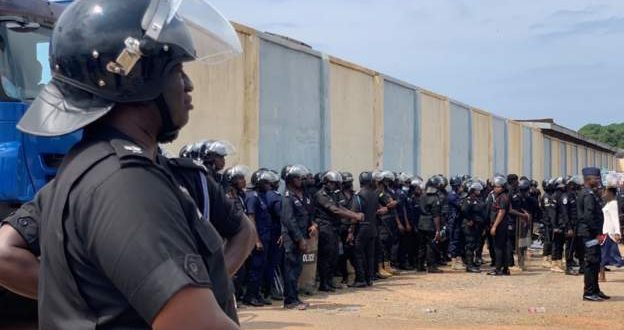 Wednesday’s protest against the rising cost of living in Ghana has so far been peaceful, unlike on Tuesday when clashes with police erupted and 29 people were arrested.

After a series of meetings with the police, protesters were allowed to use a route that runs in front of the president’s office, Jubilee House, on the condition that they conduct themselves peacefully.

The protest organisers advised demonstrators to surrender any weapons to the police and join them in a calm procession.

The police, who had earlier assembled in riot gear, have remained professional and given the protesters the needed security.

The demonstration moved off from the El-Wak sports stadium and went through the plush neighbourhood of Cantonments, which leads to Jubilee House.

A heavy security presence and barricades erected along the sides of the road prevented the protest from spilling over into the president’s office.

Protest leader Bernard Monah told the BBC that the march would end at parliament where the organisers would hand their concerns over the MPs.