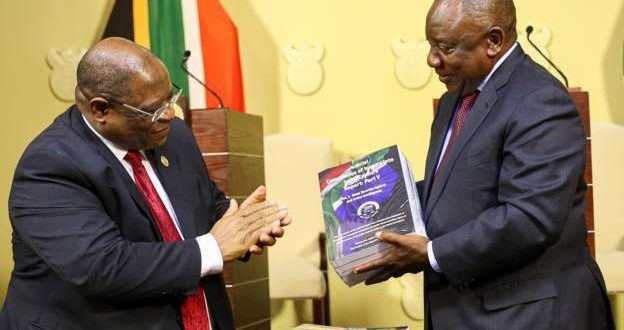 The final part of a mammoth report into alleged corruption in South Africa under the former president, Jacob Zuma, has been handed to his successor Cyril Ramaphosa.

The report by Judge Raymond Zondo is more than 5,000 pages long.

It paints a picture of a country whose coffers were looted by its former president and his associates – the prominent Gupta brothers.

It also accuses him of halting an investigation into alleged financial misdeeds by the Guptas. They and Mr Zuma deny wrongdoing.

The Guptas’ influence on the hiring and firing of government ministers has also been laid bare by the report.

It found that Mr Zuma enabled, indirectly, the Gupta family members to occupy a place of prominence to the detriment of the country.

South African authorities are currently working on having the Gupta brothers extradited from the United Arab Emirates to answer for their alleged crimes.

The commission’s chairman has also recommended that election rules be amended to allow for South Africans to directly elect a president instead of using the party system.

This, he says, will prevent the country having another leader such as Mr Zuma.

Mr Ramaphosa must now decide whether further legal action should be taken against his predecessor.