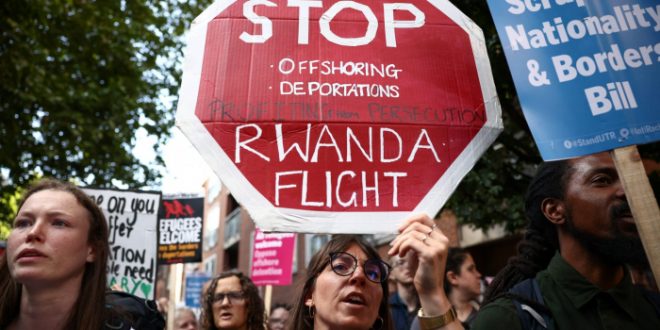 Protestors demonstrate outside the Home Office against the British Governments plans to deport asylum seekers to Rwanda, in London, Britain, June 13, 2022. REUTERS/Henry Nicholls

Asylum seekers say Rwanda better than Libya, but they will try for Europe again

Asylum seekers sent to Rwanda from dirty and dangerous Libyan detention centers say their new quarters are a huge improvement, but they still want to reach Europe, raising questions about the deterrent effect of the plan transfer of migrants to the East African country, Reuters reported.

The first flight of asylum seekers from Britain is set to depart on Tuesday evening for Kigali, although only a handful of people may be aboard amid a flurry of last-minute legal challenges.

Britain said it plans to send anyone caught trying to enter the country illegally, a tough line it hopes will cut down on migration.

This is not the first time Rwanda has taken in asylum seekers from a third country.

According to an asylum seeker, the conditions are much better in Rwanda but many other migrants sent from Libya are determined to reach Europe.