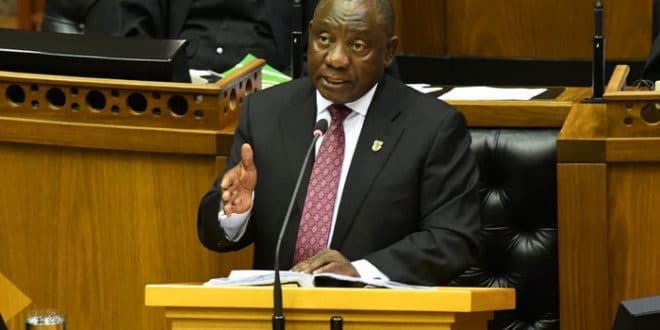 South African President Cyril Ramaphosa is in trouble after suspicions he bought silence of burglars who allegedly stole 3.8 million euros in cash from one of his properties.

Four years ago, Cyril Ramaphosa promised to fight corruption that plagues South African society to the highest peak of the state.

Today, he is accused of having bought the silence of burglars who fell on the equivalent of 3.8 million euros in cash in one of his properties.

It is in this whirlwind of accusations that Cyril Ramaphosa appeared Thursday, June 9 before Parliament to present the state budget. Unfortunately, things went a bit awry. He was violently attacked by opposition MPs who called him a “criminal” guilty of “money laundering”. “We cannot accept that a man accused of such serious crimes should address Parliament”, they notably launched.

“How much money have you hidden in your properties? You say that this money comes from the sale of animals, that the charges against you are “political” and that you have not done anything illegal. But why hide money, cover up this burglary and pay thieves to keep quiet? It looks like a mafia movie! “, shouted John Steenhuisen, leader of the main opposition party.

After more than an hour of chaos in the hemicycle, the head of state was finally able to speak. But only after being seriously challenged. In his speech, the head of state said he was the victim of “dirty tricks” and “intimidation”, assuring that he would not be “dissuaded by threats”. He dismissed the charges as “political”, admitting that there had been a burglary, but that the sum was less significant, the proceeds of a legal transaction.

Cyril Ramaphosa succeeded Jacob Zuma in 2018, swept away by multiple corruption scandals. The current president of South Africa is expected to appear before the “Integrity” commission of his party, the African National Congress, which will soon choose its candidate for the upcoming elections.