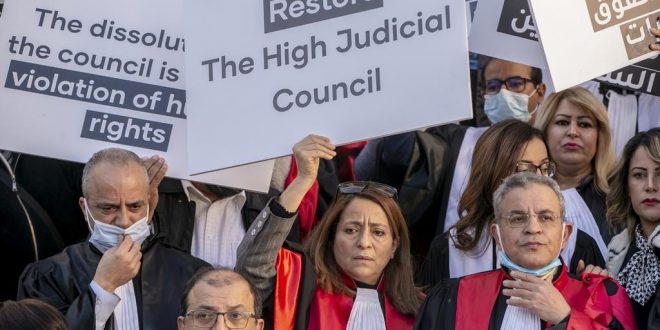 Tunisia: protesters angry after the dismissal of female judges

Protesters in Tunisia have gathered outside the Palace of Justice in the capital, Tunis, to denounce the defamation of sacked female judges, the BBC reported

They are among 57 judges dismissed by President Kais Saied last week after he accused them of corruption and protecting terrorists.

Those dismissed have since faced online attacks by supporters of Mr Saied – one of the female judges has been accused of adultery, the agency reported.

The Judges’ Association began a week-long protest on Monday against the move by the Tunisian president.

He has ordered their salaries to be deducted for the days they remain on strike.

The president has become more authoritarian since coming to power in 2019 in a landslide victory. Last year, he dismissed the elected parliament and has set aside the constitution.