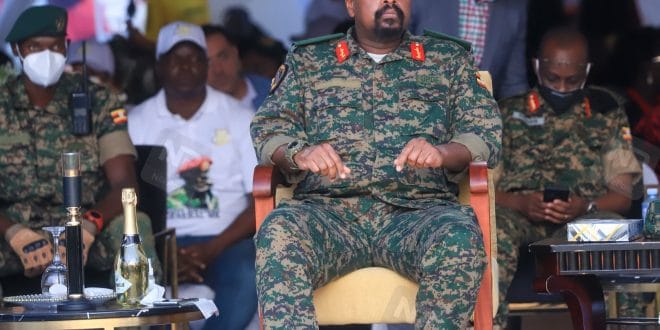 Ibrahim AMEDAHEVI 9 May 2022 Africa, East Africa, In the news, Politics Leave a comment

Uganda’s Constitutional Court has summoned President’s Museveni’s first son, Lt-Gen Muhoozi Kainerugaba, to respond to a petition in which he is accused of expressing his presidential ambitions while still an army officer on duty, DailyMonitor reported.

According to the May 6 court documents, the Commander of the Land Forces has been given 10 days to file his defence upon receipt of the summons.

Also summoned are Chief of the Defense Forces Wilson Mbadi (CDF) and Attorney General Kiwanuka Kiryowa, who are the co-defendants.

“Should you fail to file an answer on or before the date above mentioned, the petitioner may proceed with the petition which may be determined in your absence,” reads in part the court summons signed off by the registrar.

Last Thursday, concerned lawyer Gawaya Tegulle petitioned the Constitutional Court challenging what he called unconstitutional acts by Gen Muhoozi of engaging in political activities and pronouncements as he celebrated his 48th birthday last month despite being a serving army officer, the news agency reports.