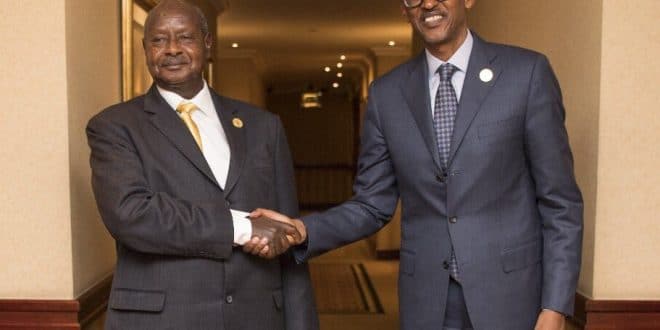 Rwandan President Paul Kagame traveled to Uganda to hold a meeting with counterpart Yoweri Museveni as diplomatic relations between the two countries resume.

A statement from State House Entebbe said the two leaders agreed to push for peace and stability in the region by addressing the crisis in eastern Democratic Republic of Congo through the East African Community bloc.

This is President Kagame’s first visit to Uganda since tensions erupted in 2019, which led to borders closure for three years.

Mr Museveni urged the regional bloc to address the insecurity in eastern DR Congo before the crisis there escalates.

Mr Kagame said it was important that all parties in the conflict are involved to solve the crisis once and for all.

President Kagame was on a private visit to the country to attend a dinner in honour of Mr Museveni’s son and commander of Uganda’s land forces Lt Gen Muhoozi Kainerugaba, who celebrated his 48th birthday over the weekend, the BBC reports.

President Museveni later tweeted photos of the dinner and thanked President Kagame for honouring the invitation “after years of not coming here”.