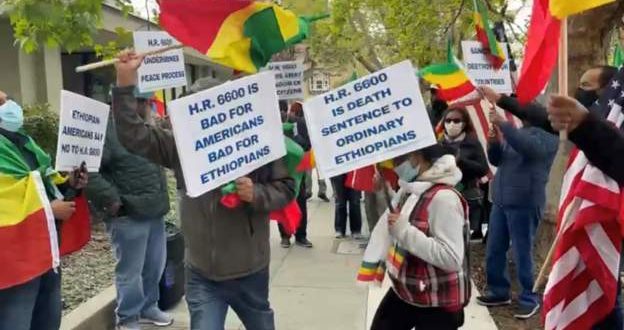 Ethiopians demonstrate against possible US sanctions

Hundreds of Ethiopians and Eritreans are protesting across various cities in the US, demanding that the US government drop two separate bills which would impose tough sanctions on people hindering an end to war in Ethiopia.

One of the bills, The Ethiopia Peace and Democracy Promotion Act, is set to be discussed by the US Senate’s Committee on Foreign Affairs later on Tuesday.

It has been sponsored by Democratic Senator Robert Mendendez, from New Jersey, and seeks to impose tough sanctions against individuals undermining an end to the 16-month conflict.

The text of the bill calls on the president to suspend US security assistance to the government of Ethiopia, and apply other targeted sanctions like visa restrictions and asset freezes to all parties supporting the war.

But protest organisers say the bills, which have bipartisan support, amount to meddling in Ethiopian internal affairs and would hurt the country’s economy.

The US has already suspended Ethiopia from the tariff-free African Growth and Opportunity Act (Agoa), due to the ongoing conflict that has killed tens of thousands and displaced millions.

African Union-led talks to end the conflict have not yielded much, as reports of fighting continue in various regions in Ethiopia.