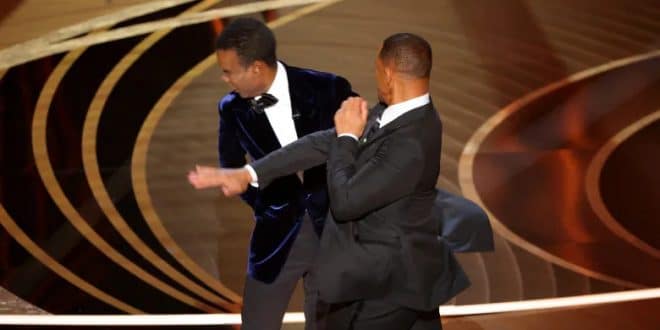 American actor Will Smith caused amazement on Sunday, March 27, by delivering a big slap on stage to comedian Chris Rock, who had just made a joke about his wife during the Oscars ceremony.

The incident occurred in the 94th ceremony of the most prestigious awards in Hollywood.

Known for his caustic humor, Chris Rock, one of the event’s presenters, had just made a joke about Will Smith’s wife, Jada Pinkett-Smith.

“Jada, I adore you, I can’t wait to see the continuation of On equal terms!”, he launched, comparing the hair of the actress, cut close to the shaved head of Demi Moore in Ridley Scott‘s film released in 1997.

Jada Pinkett-Smith, who recently spoke on social media about suffering from alopecia (partial or total hair loss), rolled her eyes.

At first hilarious, Will Smith then went on stage and gave a powerful slap to Chris Rock, the sound of the blow resonating in the microphones in front of the stunned spectators.

Note that this reaction of Will Smith is variously appreciated. While a few bursts of laughter had first sounded in the public, some thinking of a staging between the two men.

Few minutes after this incident, Will Smith won the Best Actor Oscar for The Williams Method, a film in which he plays the coaching father of tennis champions Serena and Venus Williams.

He very quickly burst into tears at the microphone. “I know that when you do this job, you have to put up with the jokes (…), always put on a good face,” he said.