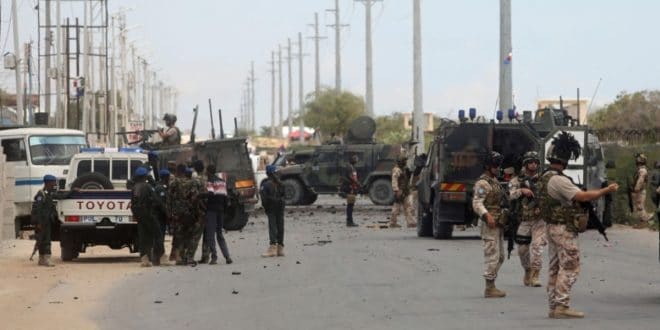 Somali security forces have thwarted an attack on a military base at the sprawling international airport complex outside the capital, Mogadishu, the state television reported.

The Somali army killed two armed assailants who were trying to break into a military base, state television said.

Earlier in the day, state TV had said security forces were battling a “terrorist incident” at the camp’s gates with a witness saying gunmen had forced their way in and begun shooting.

A column of smoke can be seen rising from the area which hosts international peacekeepers, the offices of UN organisations and diplomatic missions as well as hotels.

No flights are reported to be taking off.

The Islamist group al-Shabab said its militants had attacked the biggest foreign military base in Somalia.

Attacks by al-Shabab have become more frequent while Somalis have been voting in much-delayed parliamentary elections.