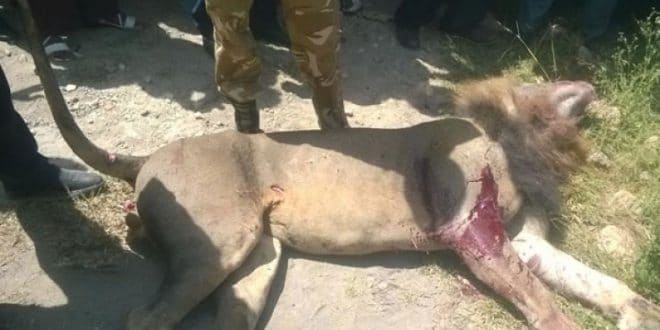 Authorities in Nigerian Borno State said a stray lion has been shot dead by hunters in a remote area near the country’s border with Cameroon, the BBC reports.

The carcass of the lion has been deposited at the government-run zoo in the state capital, Maiduguri.

Authorities say the lion was killed to prevent it from harming people.

The director of forestry and wildlife in the state, Ayuba Peter said the lion might have strayed from a game reserve in neighbouring Cameroon.

“In recent years there had been sightings of wild animals including lions, hyenas and elephants in rural parts of north-eastern Nigeria,” the official said.

Many people have fled their homes in the area because of the Boko Haram insurgency and this has allowed plants and trees to thrive and the reforested areas have attracted the wild animals, the report said.

The state’s authorities have advised people who are returning to their rural communities to be vigilant.