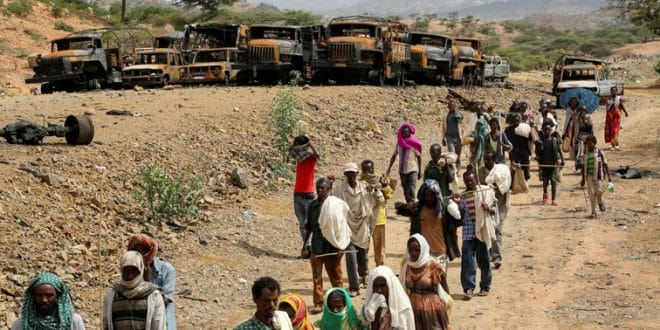 Jonathan Carreidas 14 March 2022 Africa, Horn of Africa, In the news, Politics and society Leave a comment

At least 53 people died in western Ethiopia after an unidentified armed group attacked a civilian convoy and its military escort in a region plagued by ethnic violence, Reuters agency reports, citing a rights body appointed by the government on Sunday.

The previously unreported attack occurred on March 2 in Metekel, in the Benishangul-Gumuz region, the Ethiopian Human Rights Commission said.

Twenty soldiers and three civilians died in the ambush, while 30 attackers died during the day-long gun battle that followed.

The commission investigated the incident after a video posted on social media on Friday showed armed men, some in military uniforms, using a stick to poke a man back onto a burning pile of bodies after he tried to escape.

The government said on Saturday it would act against the perpetrators.