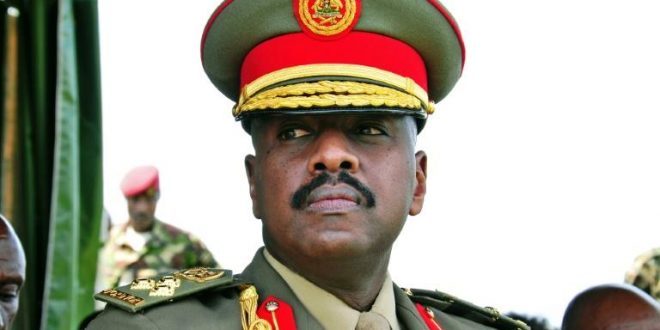 Gen Kainerugaba – who is the commander of Uganda’s land forces – tweeted that “the majority of mankind (that are non-white) support Russia’s stand in Ukraine”.

“Putin is absolutely right!” he added.

“When the USSR parked nuclear armed missiles in Cuba in 1962, the West was ready to blow up the world over it. Now when Nato does the same they expect Russia to do differently.”

Gen Kainerugaba is the first senior military officer in Africa to publicly voice support for the Russian invasion of Ukraine.

He is rumoured to be a possible successor to his 77-year-old father, who has been in power since 1986.

South Africa’s foreign affairs ministry has called for the withdrawal of Russian troops from Ukraine.

Gen Kainerugaba also retweeted prominent Ugandan journalist Andrew Mwenda, who said that even “an amateur in international power politics can see that Moscow can never allow Ukraine’s accession to Nato & EU, coz it poses an existential threat to Russia!