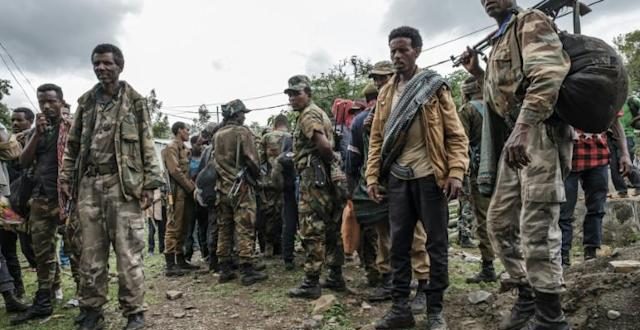 Ethiopia: Armed group accused of killings and looting in Oromia

An armed Amhara group is accused of killing dozens of people and looted property in the Gidda Ayana district of Oromia state.

The district’s top official, Adane Alamirew, confirmed the attack but said he was unable to identify the number of people killed and the extent of the damage due to the insecurity in the area.

A resident in one of the two villages targeted by the attackers told the BBC that at least eight people were killed and nearly 100 houses belonging to civilians were set ablaze.

There have been other attacks in Gidda Ayana and other neighbouring districts of East Wollega zone for several months now, resulting in the death of civilians, loss of property and displacement of thousands of people.

Residents say they are targeted by the armed Amhara group as well as the government for allegedly harbouring the rebel Oromo Liberation Army (OLA), which the Ethiopian government has labelled a terrorist group.

Mr Adane accused the Amhara group, OLA and another rebel group from the neighbouring region of Benishangul-Gumuz for destabilising the district.

He said OLA was behind the growing antipathy between Oromo and Amhara ethnic groups, with the two having co-existed peacefully for many years.

However OLA has repeatedly denied targeting any of ethnic groups living in Oromia.