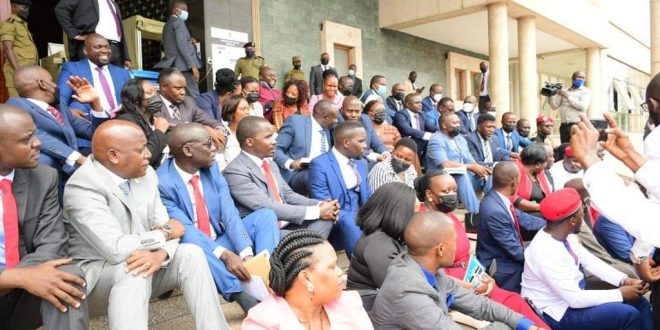 Opposition members of Ugandan parliament on Thursday walked out of a parliamentary session in protest of reported torture of citizens by security operatives, detention without trial, and missing supporters on Thursday, Dailymonitor reports.

More than 100 MPs led by the opposition leader, Mr Mathias Mpuuga on Thursday said they would not sit back and watch their supporters suffer.

They had asked the speaker for a debate about the detentions but the speaker said the issue would only be discussed next week.

The MPs have said they will stay out of parliament until the issue is listed for discussion.

The news agency has tweeted the video of  the MPs sitting outside parliament chanting slogans ‘No to Torture’, ‘Free our People’ and ‘we want Freedom’ :