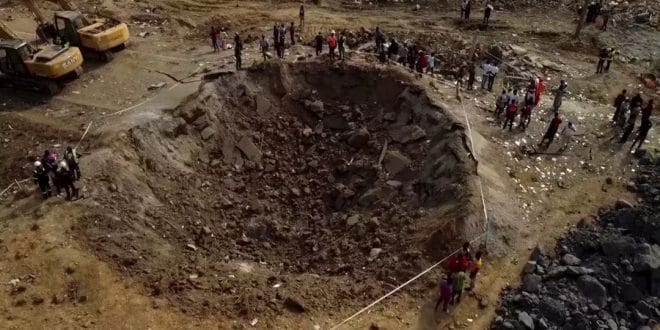 At least 13 people were killed and many others injured when a truck carrying explosives to a gold mine in western Ghana detonated, flattening a rural community, the police said on Friday.

Smouldering timber and torn-up sheet metal marked where hundreds of houses had stood in Apiate, a settlement about 200 km west of the capital Accra. Thursday’s blast left a crater roughly 20 meters wide. Doors and roofs were blown off other buildings, a Reuters reporter at the scene said.

About 180 people were injured by the explosion, police said.

“We’ve seen damage to lives and property here that is just indescribable,” said Daniel Adu-Gyamfi, a student from a nearby mining college who came to volunteer with the response team.

It was not immediately clear what caused the accident but police said a motorcycle crashed into the truck, then caught fire, Reuters reports.