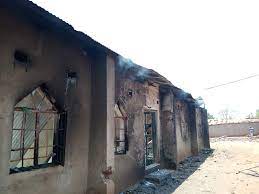 A group of angry Muslim Malawian youths burnt down a church and a pastor’s house in Mangochi district, in the south-east of the country, raising fears of religious tensions in the area.

Malawi is predominantly Christian, but the area along Lake Malawi – including Mangochi – has a significant Muslim population and in the past there have been violent religious clashes.

The latest acts of violence are said to have been triggered by allegations that some religious leaders had drawn an illustration of God, which Muslims found demeaning of their religion.

Videos are circulating on social media showing angry youths burning down a church and proclaiming they will not tolerate anyone denigrating their faith.

The Muslim Association of Malawi has issued a statement condemning the violence and asking their members “not to take the law into their own hands”.

Spokesperson Sheikh Dinala Chabulika said: “Faith leaders should avoid mocking other people’s religions so that the existing peace and harmony should continue to prevail. Nevertheless, whatever caused it, we don’t condone violence.”

As of Thursday afternoon, calm had returned after police went to the area to restore order.