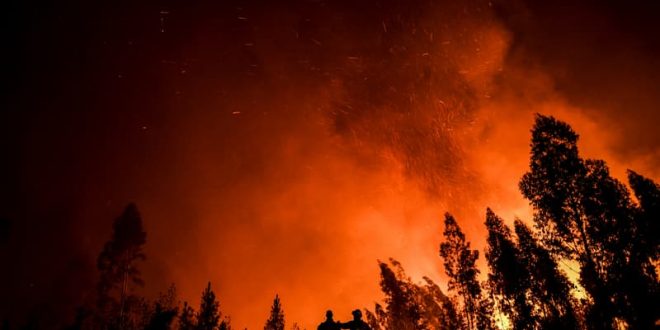 After Greece, Portugal in turn hit by a major forest fire

Ibrahim AMEDAHEVI 17 August 2021 Europe, In the news Leave a comment

More than 600 Portuguese firefighters were trying Tuesday to tackle wildfires which broke out the day before in the tourist region of the Algarve (south), making a slight injury among the firefighters and leading to the evacuation of a dozen hamlets, local authorities said.

The fire broke out overnight from Sunday to Monday in the town of Castro Marim, in the hinterland near the Spanish border, and had been temporarily contained before reactivating in the afternoon.

It then “progressed in a lightning way towards the municipalities of Tavira and Vila Real de Santo Antonio”, reaching a perimeter of about forty kilometers and an estimated area of 9000 hectares, said Tuesday the commander of regional civil protection, Richard Marques at a press conference.

Read also: Uganda to host 2,000 Afghan refugees on US request

“No deaths were reported but a firefighter who suffered burns was briefly hospitalized”, he said, while a gendarmerie official reported the evacuation of 81 people in a dozen hamlets.