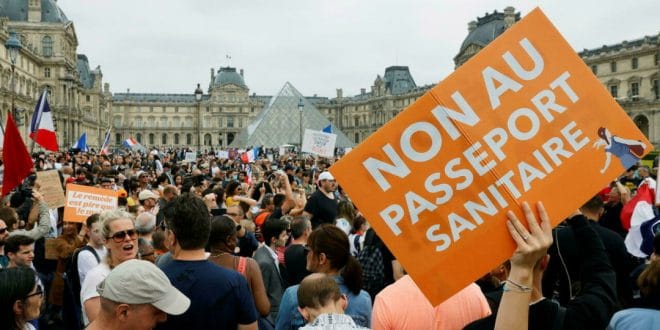 French people will be in the streets in France, this Saturday, to demonstrate against the health pass project approved by parliament. Nearly 140,000 people are expected for the event.

The anti-health passes are booming, and give even more voice since the government took its measures to contain the spread of Covid-19 with the announcement of the new health protocol at school and the generalization of the health pass in as of August 9.

Last Saturday, the Interior Ministry counted 161,000 people across France, including 11,000 in Paris.

So, for the third Saturday in a row, more than a hundred calls for demonstrations in Melun, Toulon, Douai and Dunkirk are flourishing on Facebook and Twitter.

According to LCI information, the territorial intelligence service plans a mobilization of around 140,000 people, outside the capital, with more than 6,000 demonstrators in Montpellier and Toulon, between 4,000 and 5,000 in Bordeaux, Marseille, and Nice and between 3,000 and 4000 in Metz, Strasbourg, Nantes, and Pau.

In Paris, 3,000 police and gendarmes will be mobilized to avoid disturbances to public order.