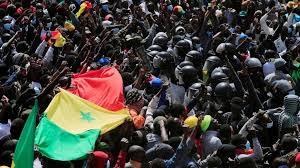 Senegal’s main opposition leader, Ousmane Sonko, has called for more protests against President Macky Sall, whom he accuses of being behind the rape charges he’s now facing.

He is accused of raping a woman who worked in a beauty salon.

Speaking in Dakar after his release, the opposition leader said “the revolution has already started and nobody can stop it”.

Mr Sonko said the demonstrations should be larger but also peaceful and lead to change in the presidential election due in three years.

Usually seen as a model of stability in an unstable region, Senegal has been rocked by its worst unrest in years, which began after Sonko’s arrest last week.

At least five people have been killed in clashes between security forces and opposition supporters, who allege that the rape charge is designed to smear Sonko.