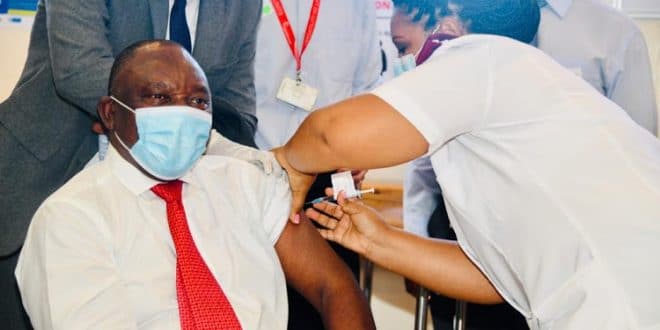 South Africa’s President Cyril Ramaphosa will take the Johnson & Johnson vaccine that is set to rollout in the country.

The president and the health minister will be immunised on Wednesday afternoon alongside health care workers at Khayelitsha, west of the country.

He says it will “demonstrate our confidence in this vaccine and help allay any fears that people may have”.

President Ramaphosa said some provincial heads and other leaders will also take the vaccine in different provinces.

“It is expected that most vaccination centres will be ready from today [Wednesday] to begin the vaccination programme,” the president tweeted.

The country halted its vaccination after doubts over the AstraZeneca vaccine’s efficacy against the variant in the country.

The World Health Organization (WHO) says even countries with the variants should use the AstraZeneca vaccine.

Studies have shown that the Johnson & Johnson vaccine is more effective in preventing severe disease, compared to the AstraZeneca doses which arrived in South Africa from India last week.

So far the Johnson & Johnson vaccine is the only one that requires just one shot, making it considerably easier to administer.